The Cyclone Dirt Trap separates dirt away from wash water. The Dirt Trap car wash guard uses nearly 300 cyclone funnels to separate abrasive dirt and debris from car wash water. Keeping the dirt already washed away from the car reduces the chances of installing swirls and scratches caused by scrubbing with abrasive dirt. Traditional car wash strainers use large open screens and vertical fins in an attempt to hold dirt at the bottom of a wash bucket. However, the mere act of dunking the dirty wash mitt in and out of the bucket pushes and pulls any dirt and debris straight up through the screen and back into the clean water. This traps the dirt already washed off the car in the mitt, and causes abrasive scratching action on the next cleaning pass. The small funnels of the Dirt Trap create cyclonic flow down through the tiny tip of each funnel, spinning heavier dirt particles out of the water through intense centripetal force.

The textured underside and small holes of the screen act as a one-way valve: dirt is pushed through the funnels with cyclonic force, but it gets trapped underneath the guard and cannot easily flow back up into the water when the wash mitt is withdrawn. Use the Dirt Trap in each wash and rinse bucket to minimize the chances of scratching and swirling paintwork during any car wash or full detail. 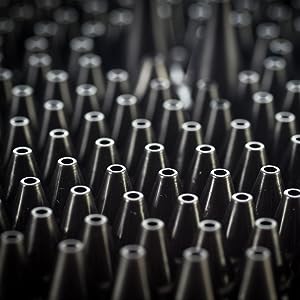 297 geometrically-positioned dirt trap cyclones deliver optimal filtration. Maximizing dirt capture and water flow in a wash bucket takes a great deal of engineering. Place too many holes, and the cones become too small to let any dirt particles through. Install too few cones, and the holes end up being big enough to allow particles to flow back up into the clean wash water. The Dirt Trap’s unique Geometric Filtering System strikes the perfect balance between cone size, dirt aperture diameter, funnel pitch, and strategic placement for maximum particle capture. The Dirt Trap is the future of car wash bucket filter technology, and will save car owners from installing billions of tiny swirls and scratches

Keeps Dirt Trapped Under The Filter And Off Your Car

Keeps dirt trapped under the Dirt Trap Cyclones to reduce scratches, swirls, and paint damage caused during washing. Old world wash screens allow water and dirt to flow through vertically. Whenever a mitt is dunked into the bucket, the downward force pushes water and dirt down past the screen, but it also pushes any settled dirt back up straight into the cleaner water of the bucket. The textured underside and small holes of the Dirt Trap screen act as a one-way valve: dirt is pushed through the cyclone funnels and is trapped underneath the guard where it cannot flow back into the clean water.

Every Dirt Trap bucket insert is molded with Cyclone Scrub Ridge rings around every dirt cyclone funnel. Rub the wash mitt directly on the Dirt Trap to scrub and agitate any embedded dirt and grime from the wash fibers, then funnel and trap it directly underneath the insert. The Cyclone Scrub Ridges are designed with the perfect grip and height to work with any chenille, microfiber, or natural lambswool car wash mitt, natural car wash sea sponge, or boars hair wash brush. The ridges are gentle on natural and manmade fibers, and will not tear apart or destroy any car wash mitt, sponge, or brush. Knock dirt, dust, grease, and grime off the car wash mitt with the scrubbing ridge, then funnel it directly down underneath the bucket insert to trap it away from the cleaner water in the bucket.